A Modest Proposal: Waving the Flag, and a Message to Tyranny.

Regardless of politics or ideological leanings to left, right or wherever; the sight of the flag still stirs something up within me. Whenever I see it fluttering in the wind I don’t see a symbol of government. I don’t see a symbol of party affiliation. I don’t see a symbol of this conspiracy theory or that, regardless of how true some may be. For me, when I see this flag; I see a symbol of We the People, We the Individuals, We the multitude endowed by our Creator with unalienable Rights. I see a symbol of the greatest of things in the face of tyranny, be it by government, the majority or any other form tyranny may take: I see it as a symbol of Hope that All Men are entitled to and can attain Freedom. Symbols are not constant, they can’t always be reduced to what they once meant, or reduced to zero. Symbols are what we make them. Would to God we once again stopped the next time we saw a flag and pondered in our hearts what Freedom means, for ourselves and our fellow man, and then proceeded to conduct ourselves in a way respecting of such a Hope. Daniel Louis Crumpton . 9 December at 20:10 ·

Fate touches him one chill winter’s day when he borrows the jacket of a long-dead postal worker to protect himself from the cold. The old,
worn uniform still has power as a symbol of hope, and with it he begins to weave his greatest tale, of a nation on the road to recovery. – The Postman

Two years ago Judge Gloria Navarro tossed the federal case against the Bundys and a few others. She later dismisses it completely with prejudice. The state says No Fair!

“My Client is Liberty. It’s every Lawyers Duty to Challenge the Leviathan of Unchecked Powers Claimed as Governmental Authority.” – Roger Roots

A Look back with Roger Roots mistrial and dismissal. Differences.
Bundy Ranch – Mistrial vs Dismissal, with or without Prejudice
Judge Gloria Navarro declared a mistrial in this latest round, the 3rd attempt at a conviction, failing again in the Nevada Federal Courthouse. Wednesday Dec. 20, 2017.

Ryan Bundy is arguably a leading force in this cohesive determination for Justice along with the unrivalled efforts from lawyers, legal aids and the great many hands of diligence lending in behind the scenes.
Shackled, contempt and cover-up, lies and suppression of evidence hidden in sealed documents and behind closed doors, secret court proceedings have bound the Truth from being presented these past 2 years. Misconduct by the prosecution, FBI, BLM and Brady/Giglio violations in discovery obligations may only pale in comparison to the misconduct, civil and criminal acts and vicious prosecution by the State.

January the 8th will hear motions from the Defence Team to dismiss charges with prejudice. If not resolved at that time, February the 26th has been set on the Docket to reconvene and a new case.
In the courtroom will see the Defence, Cliven Bundy Ryan Bundy, Ammon Bundy, Ryan Payne – Bob Whipple, Brenda Weksley, Dan Hill, Roger Roots, Larry Klayman, Maysour Fletcher, Morgan Philpot and Rick Koerber < Judge Gloria Navarro > Stephen Myhre, Nadia Ahmed and Daniel Scheiss will represent for the State (maybe).
Bundy Ranch – Mistrial vs Dismissal, with or without Prejudice – YouTube

Ryan and I have been getting many messages about the fact that the Government is working on trying to re-open our case. This is to hopefully dispel some rumors, and at least, let you know, what we know.
The Government filed an appeal to the 9th circuit that challenges Judge Navarro’s decision to dismiss our case with prejudice. When a case is dismissed with prejudice, it cannot be retried again. The Government is hoping to overturn the finality of that decision, so they can take evidence back to a grand jury…then, they’d like to re-indict Cliven, Ryan, Ammon, and Ryan Payne. So…this hearing that is coming up in March, is to argue Judge Navarro’s ruling before the ninth circuit back in January of 2018. If they successfully get it overturned, the men could be re-indicted.
I’m not sure how many of you were there in the courtroom when the case was dismissed. The room was packed. Her words and language were strong as to the irresponsibility of the prosecutor’s and how they mishandled our case. The fact is, the grand jury was lied to, as to many of the facts that got the men indicted to begin with. The lies were exposed in those first few weeks of evidentiary hearings, jury selection, and trial. Facts about our men, and their non-violent nature were withheld from the evidence they turned over. Facts about cameras being trained on the ranch home, along with facts about there being snipers and surveillance, on the family and home were not only withheld, but openly mocked when they were inquired about by my husband. When Ryan Payne called for protection from militia…it was because snipers were trained on the protesters and family…they denied it, but it was factually true. All of that came out with court proceedings, along with a ton of secrets, that we would all get kicked out of the courtroom for. To re-open our case is a long shot, but our judicial system is corrupt. However, Judge Navarro is a Harry Reid appointee….she’s in no way our friend, but her tongue lashing to the prosecutors was strong. I have serious doubts her decision could be overturned.
So, am I worried? No…however…we still have Greg, Todd, and Jerry still incarcerated over the lies that were told to the jury and the grand jury. Could another trial help them?? If it could, then it’d be worth it. The truths that already came out in our hearings should logically set them free already. But it hasn’t, so we watch and wait. God is still bigger, and He has helped us through all of this. My faith and trust is in Him. Angie Huntington Bundy · 15 December ·

To #TheMAX
I asked Maxine Bernstein if she might tell me what to look for in the appeal of the Bundy et al dismissal next March. How long until the 9th gives its decision and what happens if Navarro’s ruling is overturned.
There will be a date set for oral argument sometime in March 2020 on the appeal before the 9th US Circuit Court of Appeals—and then it’s anyone’s guess when the court would issue a ruling – could take months-if Navarro’s ruling overturned – govt may be able to bring a new case. Maxine Bernstein @maxoregonian Dec 3, 2019, 11:20 AM
Thank you Maxine. Let me tell you again how much I appreciate your work, and for all the information you provide. Most especially for taking the time to respond personally to my questions. Respectfully, Vincent.
Bundy et al. Dismissal with Prejudice – Governments Reply Brief.
ON APPEAL FROM THE UNITED STATES DISTRICT COURT
FOR THE DISTRICT OF NEVADA – IN THE
UNITED STATES COURT OF APPEALS
FOR THE NINTH CIRCUIT
http://www.seditionists.com/bundyappeal105.pdf 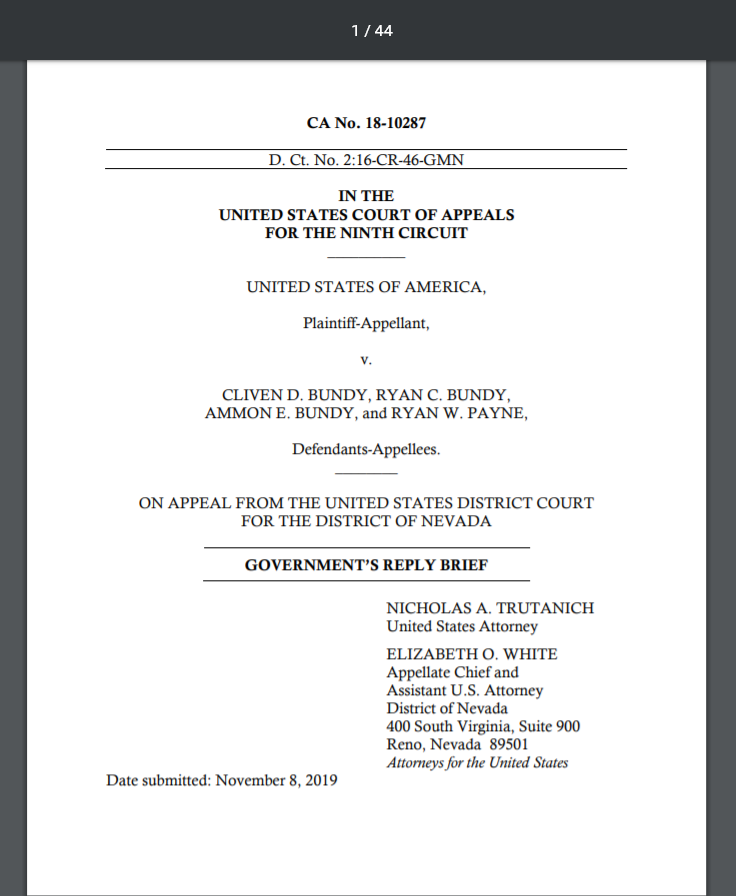 Ponder Gander ♫♫(Podcast-⚫-Player)♫♫ On the Record

“The measure of a man’s power is the depth of his mercy.” – The Emperor (Christopher Moore)

The Great Debate in Extreme Environmentalism Video with Kierán Suckling, The Center for Biological Diversity.

Confronting the Center for Biological Diversity Founder, Kieran Suckling and tactics that include staging Counter-Protests and suing the Federal Government to pressure the government to remove people and property from their vested rights. [*]

Who is this poor boy #Scaramouche and does he do the Fandango? #ᴾᵒⁿᵈᵉʳᴳᵃⁿᵈᵉʳ (♫♫Noble Nonsensory♫♫)
‘Tis true, I come to discover secrets but more to trust, than to suspect: fitly, nothing but words gratify me. @CapitaniZanni Portmanteau Sᶜᵃʳᵉᵃ ᴹᵒᵒˢʰ
ᴺᴱ𝒮ᵀᴵᴺᴳ𝒞ᴸᴼᵂᴺ𝒮
♛
\Ѿ/
_/༒\_
the boneyard.
( ͡o ͜ʖ ͡o)

At Large in the Americas. Home or on the roam is in the Heart & Hills in the Arkansas Ozarks is where I’m from. —  #VinE #RLMRadio #Rlog #Artunication #ⱽⁱⁿᴱ #ᴿᴸᴹᴿᵃᵈⁱᵒ #ᴿˡᵒᵍ #ᴬʳᵗᵘⁿⁱᶜᵃᵗⁱᵒⁿ 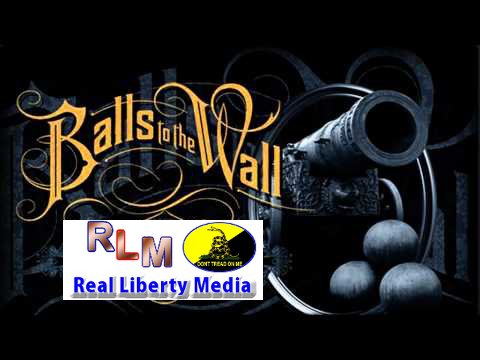