On December 27th, 2012 at 11:00 PM Eastern the weekly show on Real Liberty Media (RLM) on Channel 3 was aired with your hosts Grimnir and Moosegurl. This was the 4th annual predictions for the next year show. During the show, we received many predictions for 2014 in the chat room. 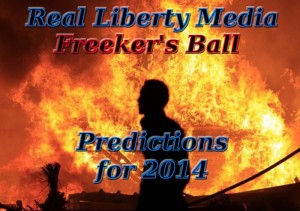 At the end of 2014, we will do another predictions show for 2015 and we will review the predictions listed below to see how accurate we all were.
It was a very fun show and we had a great time doing it. The audio podcast of the show is embedded at the top of this post. For anyone reading this that is unfamiliar with IRC (Internet Relay Chat) and are wondering why the funny names people have, they are just nicknames that people give themselves when using IRC. OK, On to the predictions. The predictions are numbered in the order they were received.